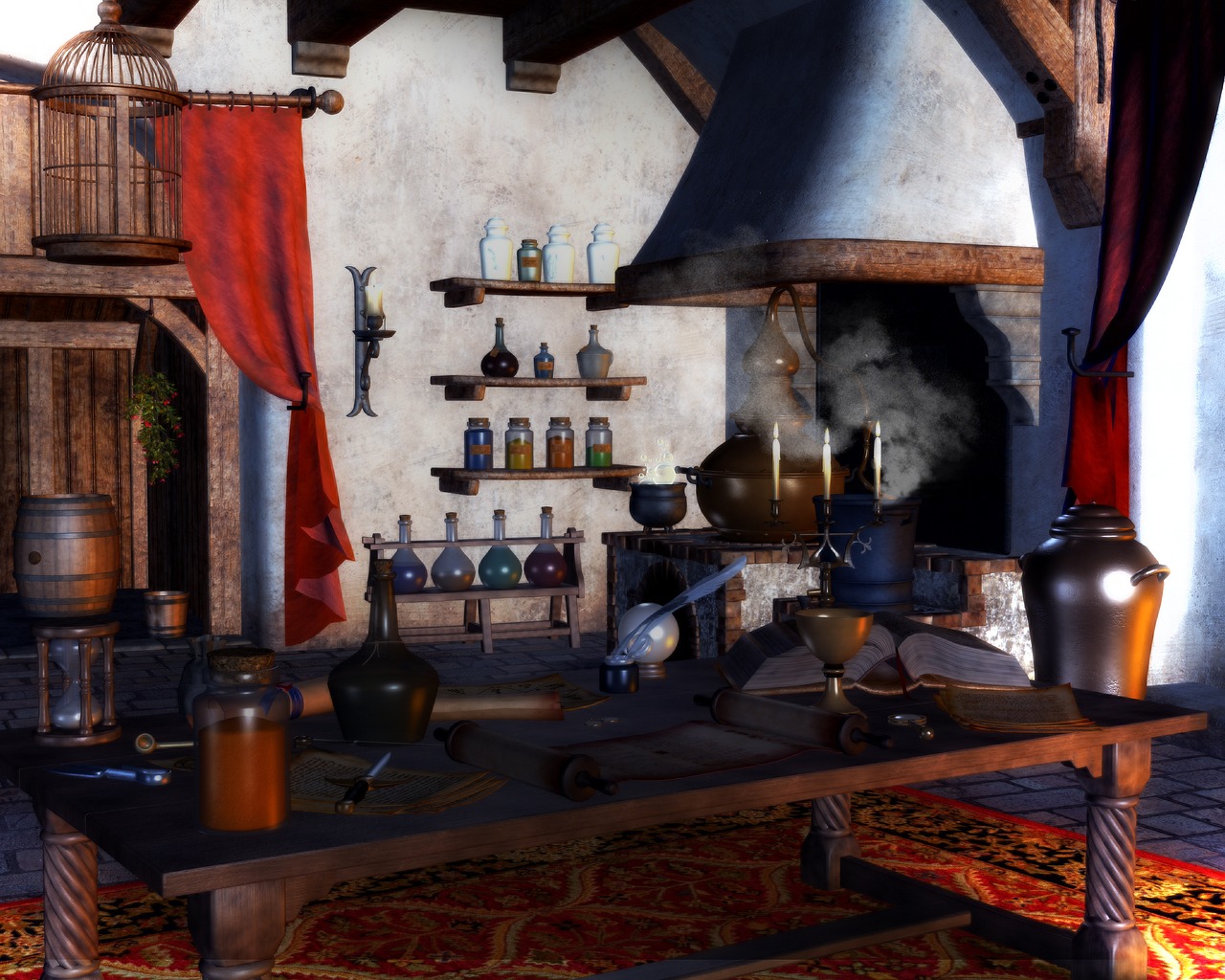 The consensus was that Zelig had transmuted a potentially happy life into one of shame and disappointment. He even managed once to change gold to lead, and the other alchemists never let him forget it.

“By the Caduceus of Hermes!” puffed Frederick, an important alchemist, whose beard tended to gleam with spittle. “A competent practitioner of our arts should, at minimum, understand the difference between The Four Elements and The Seven Metals of Antiquity. Our associate Zelig does not. He calls them The Eleven Important Things and is unable to name eight of them at one go.”

As proof even a bad alchemist can get lucky and accomplish something of value, a day came when Zelig inexplicably invented the Children’s Wee Alchemy Playhouse. Thousands of the fully outfitted workshop pop-ups were sold in shops worldwide, and their popularity did more to promote proto-science than anything since the introduction of opium.

“We are stunned by Zelig’s achievement,” said the twins Udo and Uwe, co-chairs of the arcane organization of alchemists of which Zelig was a member. They said it in unison, which some found unsettling but the habit of speaking that way had cemented the twins’ position as powerful overseers of pseudo-scientific goings-on.

The twins continued: “Despite our order’s devotion to the mysteries of neo-magic rather than constructs of the marketing persuasion, we hereby recognize Zelig’s feat. For the first time, a base material’s metaphorical transformation into gold will stand as if it were literal.”

To Zelig’s credit, he was eager to admit that the Playhouse idea had come to him in an elixir-induced trance. This may or may not have been the case, but was an example of how readily a chronic underachiever can refuse to believe that they actually did something right for once.

Humility or no, Zelig used his newfound wealth to indulge a secret dream: he had his silk underwear, the only luxury he’d ever possessed, remade into handkerchiefs. He wore one folded in the breast pocket of his newly tailored suits.

“Hello, world,” he’d say to the mirror each morning. “Arse before heart. That’s the wisdom of the ages, isn’t it?”

Zelig was determined to surpass the grudging acceptance he had won from his brothers and sisters allied with Esoterica. This mission increased tenfold when he became acquainted with Mary, the recurrently widowed and highly esteemed Mistress of Panaceas.

“My affection for you is sudden and profound, my beloved Mary,” Zelig said a few weeks after they met. “Surely you have plied me with one of your efficacious formularies!”

Mary smiled. She couldn’t believe that her new amour was unaware of the rumors concerning her previous spouses’ premature deaths and that she had allegedly tested her potions on them. In fact, Zelig was well-versed in all of the dark innuendo. The expressive movements of Mary’s hands, the intelligence etched upon her brow, the sensual arc of her perfect ears, evaporated any misgivings he may have harbored.

Their nuptials were the organization’s social affair of the decade, performed under starlight at the local marble quarry. Thousands of candles floated on lily pads scattered across the bottomless lake. Alchemists from even the world’s edge were in attendance, and everyone agreed that the refreshing punch, transmuted from fruit juice and soda pop, was an event in its own right. On that day, Zelig and Mary proclaimed their perpetual love for each other.

Years passed like pages torn from a calendar. Zelig, whose ardor for his wife burned fiercely as ever, began to feel the bone-crackling effects of aging. He did not speak of his concerns about a narrowing future on Earth but instead spent hours poring over ancient texts, which he read forwards and backwards in the hope of gaining special insight about extended life.

One morning, Mary found Zelig in his library. His face was wet for he had wept in his sleep. She placed an exquisitely sculpted hand on his chest. “Why the tears, my love?”

Zelig opened his eyes and his sadness dissipated, as it did whenever he gazed upon his wife.

“Darling, I will tell you now,” he said, “I have concealed from you my despair that someday we must become separated by the doom of all living things, and I do not want our bliss to end!”

“Oh, sweet Zelig!” she replied. “I, too, have a confession, and your concerns are my own. The thought of becoming separated from you is unbearable, and I have endeavored to find a solution — ”

From behind her smock she produced two small, plain vials. In a flash, Zelig visualized a more eye-catching container and perhaps brightly colored labeling, but his marketing impulse fled from the mounting excitement.

“Is that — is that what I think it is?” he stammered. “Have you done it, my darling? The Elixir of Immortality?”

“Indeed,” she replied. “A life’s work, fortuitously in the service of my heart’s deepest desire, which is to be with you always.”

“It’s the remedy to my misery,” said Zelig. “With this we can gain eternal happiness. The perfection of body and soul is at hand!”

Mary’s devotion to her husband was matched only by her dedication to the alchemic precepts. Bride of the alembic long before she met Zelig, she was her generation’s brightest star in the pursuit of the ultimate panacea, and her ascendance was at hand.

“Let us not speak of distillates and essences,” she said. “The acids and pyrites; the camphor, vitriol, arsenic, and salt. Our love provides the catalyst that binds these compounds and bends them to my will. Are you ready?”

Mary did not declare her innermost uncertainties — that the contents of the two unmarked vials were both similar and dissimilar because doubt had infected her final calculus. She reasoned and hoped and dreamed that passion must prevail over all. At last, after four feckless marriages, the fifth would be the one that endured.

Zelig and Mary each uncorked a vial and without pause consumed the contents. The husband kissed his wife as if to seal this newest wedding vow — to live forever.

A glow spread from deep within Zelig’s gut and it surged to his body’s extremities. Euphoric, he felt he would burst if he did not sing or laugh or cry out with joy. And then he burst anyway. Puffs of ashes and vapor escaped to rejoin the plane of Earth. Depleted, Zelig’s shrunken remains slumped into a tumble of fine clothing, capped by a red silk handkerchief.

Mary collapsed to her knees and sobbed. How could her formulation have gone so wrong, when even now she could sense its alternate version spreading vigor and longevity through her own veins? It seemed that fate had decided to send Zelig back to his former personae, that of the hapless and unfortunate failure.

Zelig’s widow spent uncounted time — she had plenty of it — pondering her loss and triumph. What now? Her personal tragedy negated alchemy’s, and her own, greatest achievement. The complex tincture lingered on Mary’s lips indefinitely. She had not created the Elixir of Immortality, but instead divined the Potion of Living Too Long.

MICHAEL GRANT SMITH wears sleeveless T-shirts, weather permitting. His writing has appeared in elimae, Ghost Parachute, Longshot Island, The Airgonaut, formercactus, Riggwelter, and others. Michael resides in Ohio. He has traveled to Hong Kong, Shanghai, and Cincinnati. To learn too much about Michael, please visit http://www.michaelgrantsmith.com and @MGSatMGScom.