A rough hand rattles my shoulder. “Get up, Danny. The sun won’t wait.”

I slump into the cold glass of the passenger window. Dad’s burnt coffee and cigarette smoke vie for dominance in the pickup. A wisp of outside air slips through and I lap at it.

Our endless footfalls pulverize the frosted grass. Dad finally finds the perfect spot and we crouch in the biting wood, coiled for sound or movement. I allow my eyes to close and a second later feel the rousing shake.

My vision blurs. I travel back in time.

Bounding across our toy-studded backyard with his pink tongue flapping is my Scotch. He jumps and paints my neck with warm slobber. I dig my hands into his thick fur and hug him back.

Dad snorted. “A vet? They’ll charge us out the wazoo for nothin—tests and crap that ain’t gonna make him no better.”

End of conversation. It wasn’t about the money, Dad said. He was going to take care of Scotch.

He prepped with a case of Budweiser and stumbled out the door, Scotch in his arms like a new bride. I pulled at his legs but he kicked me off.

I followed. I thought by coming I could stop it.

The whole way from our place through the farmer’s field and into the copse beyond, I reasoned with him. “Scotch might get better. I’ll take care of him. We don’t need a vet…Dad?”

Dad slid back the action like he always did before a shot. Until that moment, I associated the noise with New Year’s Eve.

I did what any boy would do: threw myself over Scotch’s wheezing form like Pocahontas.

Dad swore and almost lost his footing. “Dammit, Danny. I almost killed you.” He grabbed me by the arm and held me aloft. With his other arm, he pointed the gun at Scotch and shot him as I dangled, thrashing.

“Now look what you did.”

Scotch was hit in the leg. He tried to bring his tongue to the wound but didn’t have the strength. Dad dropped me and crushed my face to his thigh as he raised the gun again. I beat at him with boneless fists.

The blast and Dad’s recoil and Scotch’s silence said it was over.

A rough hand rattles my shoulder.

The calloused, thick hand that wants me to grow into it shakes me out of the memory. “What the hell, Danny? Take the shot.”

KELLY GRIFFITHS lives with her husband and children in Northeast Ohio, where the sun always shines and her muse does the housework. Her work appears in Reflex Fiction, The Forge Literary Magazine, and Ellipsis Zine. 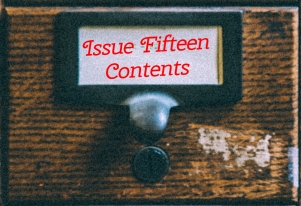